Located on the 2,000-meter high East-Yunnan-Plateau which almost brings mild temperatures throughout the whole year, Kunming is also known as the “City of Eternal Spring”. The industrial city of Kunming is the capital of the Chinese Province Yunnan and grows gradually around the Dian Lake. 1276 the city Tuodang (founded in 765) was renamed into Kunming. Later in the 14th century it was taken over by the Ming Dynasty and secured with city walls.

Most tourists pass by Kunming on their Yunnan Trip at least once due to the newly built and China’s fourth largest airport, Kunming Changshui airport, as well as the numerous bus and train connections to Yunnan and the rest of the country. But Kunming is not only the linchpin of Yunnan, but has developed in an attractive city for tourism in the last few years.

In addition to the attractions like the Pagodas of the Western and Eastern Temple, the Green Lake and the Daguan Tower in the middle of Daguan Park, which are all within the city area, Kunming region offers some spectacular sights. In the surroundings the Qiongzhu- and Yuantong Monastery, the Dian Lake and the western mountains (Xishan) attracting Tourists. About 90 kilometers north of Kunming you will find the Juixianger Karsten Height Groups, which are one of the most beautiful landscapes in the world. It is worth spending a few more days in Kunming to explore the city itself and the surrounding areas! 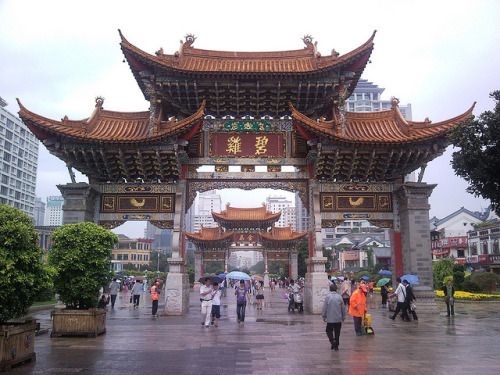