On this breathtaking (because of the altitude of the region you can take that literally) motorbike expedition through the west of China we are exploring for us unknown areas of this gigantic country. West China, that means desert landscape, high plateaus, grassland und snow covered mountains. Here, in one of the most depopulated regions of the world, travelers are coming across wild donkeys and huge vultures. On this motorbike tour through China we are mainly focusing on the Qinghai province. In Qinghai, on of the biggest provinces of China (two times bigger than Germany), lays the source of the Yellow River, which gets its colour from loess. Despite the size, only 5,5  Million people live here; 20% of those are Tibetans. On the way to the source you need to go past the pass and glacier of the Amne Machine („snow covered mountain), a holy mountain in tibetan buddhism. It was considered the highest mountain on earth until they figured out that it actually is over 2000m lower then Mount Everest.

According to the legend the tibetan mountain god Machen Pomra lives here. The area we are traveling in is still considered to be the tibetan high lands whose Qinghai-Tibet Plateau is the most remarkable one. Here the Yellow River springs at an altitude of 4500m at the Gyaring- and Ngoring-Lake. Very close to here you will find one of the biggest salt lakes on earth, the Qinghai-Lake, named after the province. At an altitude of 3195m this lake measures about 4583 km² of surface, about two times larger than Luxembourg. But by now it is endangered since a steady shrinking. Hopefully it won’t witness the same hard fate like the Aral-Lake in Kazakhstan and Uzbekistan. We are setting of to explore the source of the Yellow River, to make a courtesy call on Amne Machin, to take a bath at the Qinghai Salt Lake and of course to experience the most beautiful roads and adventures landscapes. 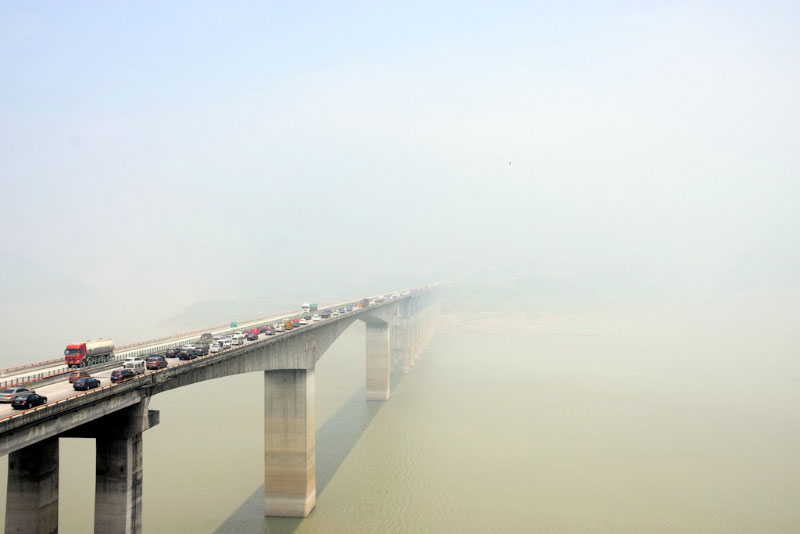 The highway from Chengdu into the Himalayas. Even if Chengdu is said to be one of the most worth living big cities of China still its smog reaches the mountains ca 140 kilometers northwest of Chengdu. Soon we will be above the clouds of smog. 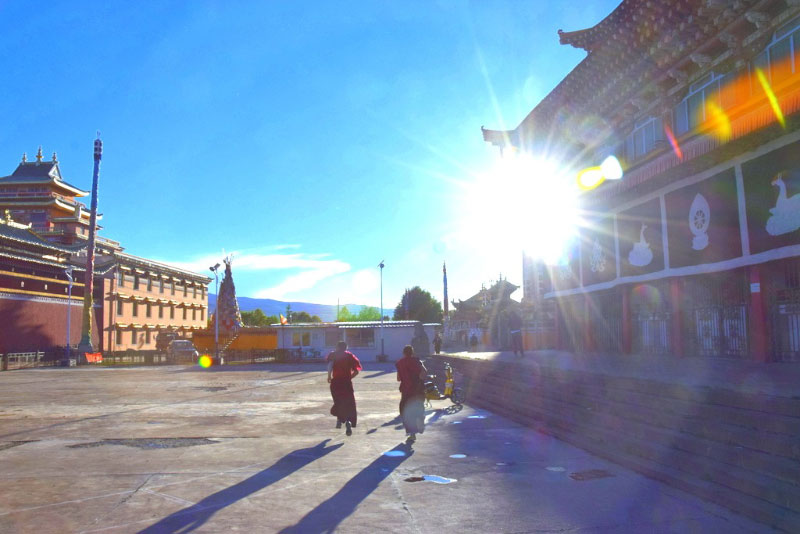 The Buddhist adepts are in a hurry after their evening education. This monastery in Aba is connected to the old Bon religion, a religion that was taught in Tibet before Buddhism and assimilated into Buddhism. 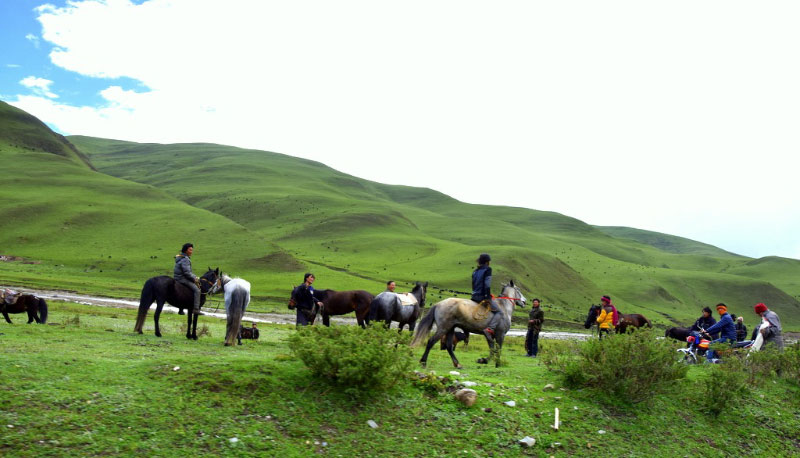 The Tibetans are horse people. Horses are traditionally an important and worthy animal used as a gift in foreign affairs, for trading tea on the old Tea Horse Road and of course for the famous horse races during Tibetan celebrations.

Beside horses motorbikes are mostly used for traveling. A lot of scarves replace the helmet. These motorbikes are often equipped with a lot of colourful LED lights and a soundsystem, that is switched full on. 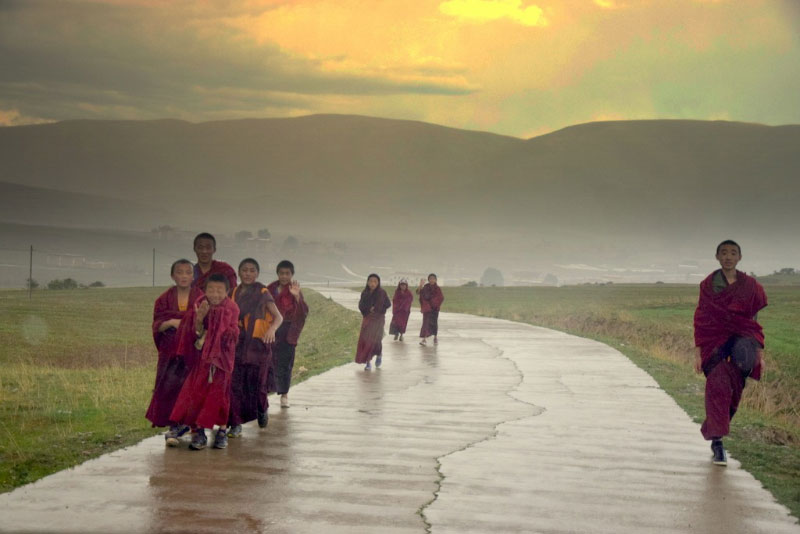 These Buddhist scholars are coming home, back to their monastery. Buddhists are strongly connected to nature and a lot of their religious rituals takes place outside.

Himalayan vultures mauling a roadkill. It was a small yak. The wingspan can reach over three meters. They are cycling in high altitude often attracted to carcasses by crows. Their only natural enemies are snowleopards and wolves. Building their nests on cliffs in 3000 to 4000 meters height nobody can reach them. 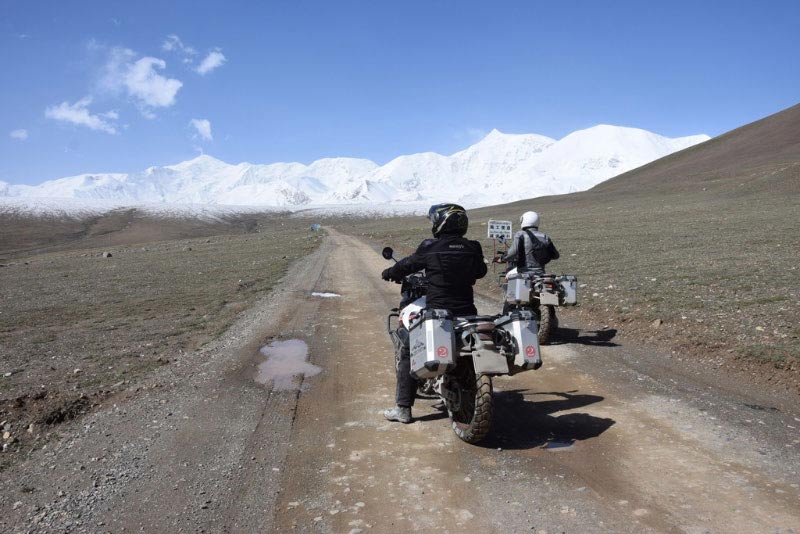 The road to the holy mountain of the Tibetans. The vastness of the country is deceptive. The Chinese government is building a highway close to the mountain. Still the landscape is unique. 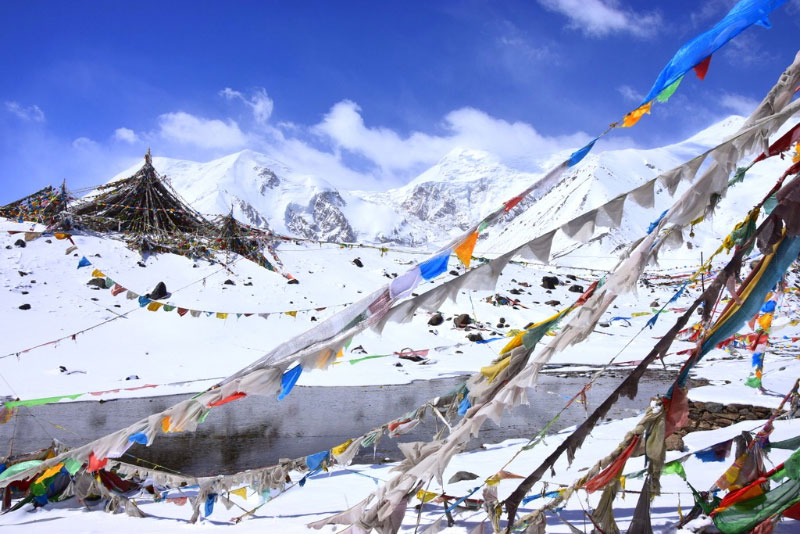 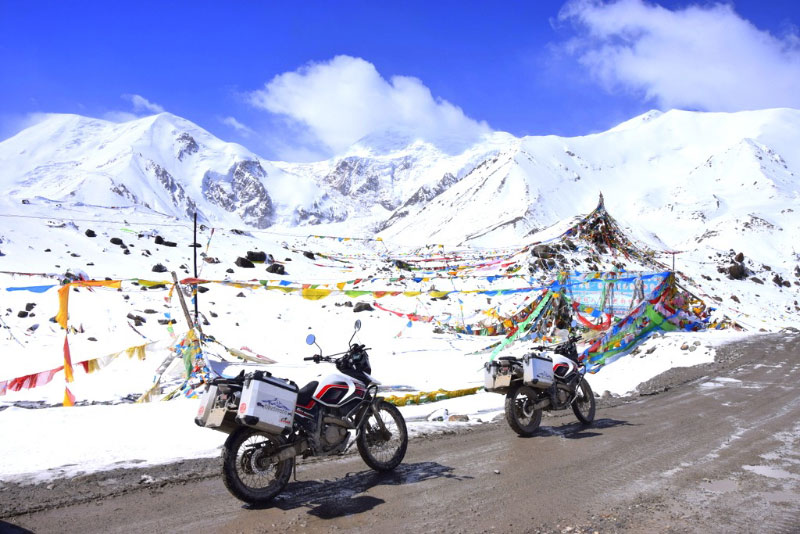 The motorbikes have no problem with this slippery unpaved road. But as we do, they feel the altitude, on 4600 meters the revs are going down. 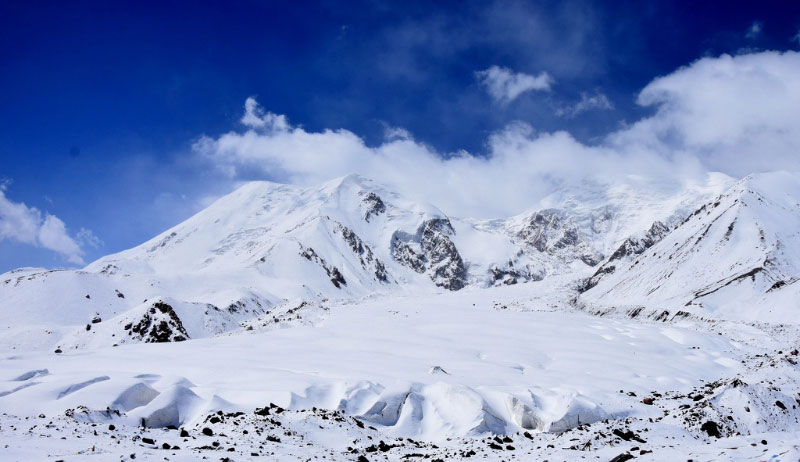 Global warming becomes noticeable even in faraway Qinghai. In the last four decades 17% of the Amne Machin glaciers melted. Still the ice masses flowing down from the 6282 meter high mountain are immense. Until 1956 Amne Machin was considered to be higher than Mt. Everest. 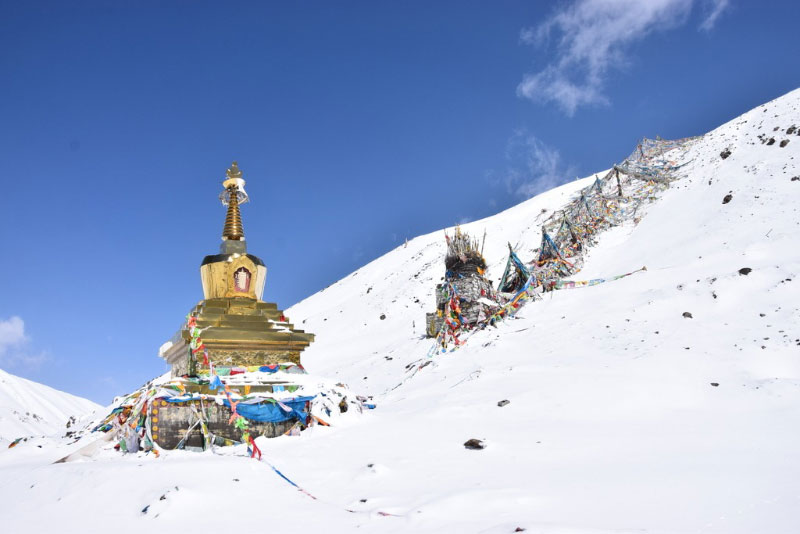 Holiest mountain of Eastern Tibet, on the highest peak resides Amnye Magyal Chenpo Pomra, most important mountain god of Buddhism, whose crystal palace reaches from deep in the earth far up to the sun. Already the mountain gods of Bon religion dwelled here. Before cultural revolution 10,000 people each year made the kora, the 200 kilometer pilgrimage around the massif.