I had never been to China before, so by the time I had been picked up at the airport and zoomed off into the southern city of Kunming, I was filled with a feeling of giddy anticipation. In two days I’d be climbing onto my mechanical horse, a Qingqi Liger 250. Hendrik calls it an ‘Enduro’: “from ‘endurance’ in German, because you can ride forever on or off road!” Two day, and I’d be pulling the throttle, kicking it into gear and beginning a 13-day adventure that would show me things that would surpass everything I’d thus far imagined. I met the others in the group. We were 5 plus our 2 guides, one of whom was German and owner of the tour company, Hendrik. I could immediately tell they were as adventurous as I am; and our guides were ecstatic to have us there. 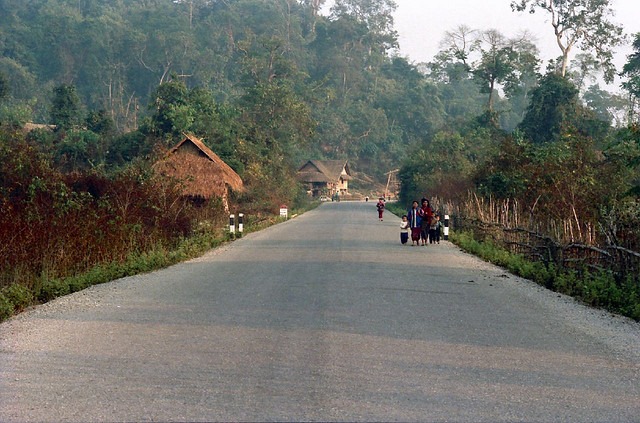 All in all, the energy level was good, and Kunming gave us a chance to get to know one another. A Chinese temple is something spectacular, and the Yuantong Temple with its arched bridges and lagoon surrounds did not disappoint. I only wish I had read up on the place before going, to make better sense of it. “This is the city’s largest Buddhist temple,” said Hendrik. “It’s a major pilgrimage site.” And so it was—but regardless, we seemed to have it to ourselves. Kunming had yet more to offer. We found our way to the Tang Dynasty pagodas, where the liveliness of this Chinese mega-polis put itself on display.

I love to be twirled around in the goings-on of daily life, and here, under the square-ish pagodas, I became dizzy and smiling. I couldn’t help but wonder what the Chinese here thought of our group. I was comfortable—we were not the typical tourists, and Hendrik surely did not treat us like we were—we were more like a close-knit group of old pals. The last thing we saw in Kunming was the Bamboo Temple. I decided to draw the points of its roof, which were upturned in that iconic image of Buddhist architecture. In the morning, we’d get underway. On the 3rd day, we were outside the city, having found our bikes parked outside the city jungle. I felt the powerful contrast between the urban and rural settings. We had been in a maze of concrete only an hour before, and now we were on small roads in the countryside, zooming on the edges of farmland and along still lakes. More amazing still was our end point for the day, Jianshui. The town had an old center, replete with the stuff of history. The Confucian Temple was China’s third-largest, and I couldn’t help but imagine synchronized martial artists practicing in its main square —goes to show the kind of image pop culture instills in us. We also saw the ancient city gates.

My favorite, however, was Zhilin Si, a monastery built entirely of wood whose interior was thick with incense. In the night our lodging fit the day’s theme. We stayed in a 10-room, century-old house, complete with a peaceful enclosed courtyard garden. After breakfast and laughs with the group, we mounted our motorcycles. The other guide besides Hendrik drove the support truck, bringing along all the necessities for emergencies and the like, and which would be used to bring the bikes back to China from Laos when all was said and done. The greatest thing about motorcycles, and the reason I love them, is because despite being in a group, the experience is yours and yours alone. Today, the 4th day, would bring us into scenes of ultimate grace. Up, up up we rode, curving sharply with the winding way as we blared past virgin villages. What luck that there was such sparse traffic! You can’t even use the word ‘traffic’ to describe it! It was a perfect route into the sky. We went so high, and below us were the clouds, scatter-puffs only, through which peered the glimmering surfaces of rice paddies; these were stacked as unbelievable terraces, forming scenery that you cannot find in the developed world. When evening came we stayed in a small village commanding a perfect vista over this enchanting sight. On the 5th day we were entering into the territories of the Hani, Lahu, Wa and Yi minorities. The road was unrelentingly curvy, but all the better. I didn’t even mind the bumps and potholes that peppered the whole way, which was poorly paved. I loved it. Clear, fresh mountain air rushed passed my ears.

We came down numerous hills with vistas overlooking boats on the river to villages uncorrupted by too much commercialism. We lunched in a small restaurant far from any town. The food was impossibly fresh, and never have greens tasted so good. Afterward we drove on, coming down eventually to the Lixian River, where we started passing fishing villages that gave the aspect of humble humanity to this land. We ended the day in small Jiangcheng. Our route would bring us slowly closer to the border with Laos and Vietnam. I never got tired of the rice terraces before, and now it was all tea, which were like rolling, ribbed washboards. We stopped to take in another view, and again to smell the aroma that would make the famous Pu’er tea. “We’re in Xishuangbanna now,” said Hendrik. The other guide pitched in, saying: “It’s my favorite.” “Why?” I asked. “You will see in the capital.” We arrived to tropical Jinhong, and I saw what he meant. We’d have the rest of the day plus all the next day to rest here. I broke off from the group and spent my time fullyimmersed in the wonders of this capital city. It’s completely unlike Kunming—this isn’t where Chinese modernity rules supreme; here, it’s the Dai minority whose culture is on display. Already, I was in a region where fusion between Southeast Asia and China was evident in the impossibly good food and altogether charming atmosphere. I saw pagodas, the market, and even found some time to go with Hendrik to visit some surrounding villages. More importantly, we made our way 80 kilometers through tropical forests to the Manfeilong Pagodas. These Burmese-style pagodas were unlike anything we’d thus far seen. They were in a good state, and untouched by the often damning influence of Chinese conservationist. I sat to draw them. The day finally came that we would cross the border to Laos.

The reason I decided to do this tour was because I had always been intrigued by Laos. I knew that my countrymen had bombed it, and whereas many vets return to Vietnam, in truth I wanted to learn of this much more obscure, almost forgotten Southeast Asian country. We dealt with the requisite border protocols and by early evening we were in Laos. The further south we had come, the more tropical the climate. Now we were thick in the tropics, and the moving motorcycle gave the same sensation as a cool fresh-cracked cola. We stayed the first night in Luang Namtha, a small town that gave credence to the idea that Laos was a country of laid-back simplicity, albeit a rural simplicity where cold beer was not difficult to find, unlike in China! The next day Laos showed us its geological magnificence. We summited and curved around endless hills through a lush, boundless tropical forest. Villages were dotted here and there, all of them made of sturdy bamboo, and onward we pushed. One would think that we were missing so much, and it would be true if not for the homestay. When night was soon to be upon us, we stopped at an unassuming place on the river, boarded boats and arrived to a small enclave of life, a village where a local family welcomed us all as their guests. They lived in the same bamboo houses that we’d seen scattered along our journey. We learn that following each rainy season, these villages are essentially built anew.

Regardless of the apparent poverty, the family slaughters two chickens and prepares us one of the freshest meals I’ve eaten. The homestay brought us unimaginably close to the local culture, instilling memories that would not soon fade. In the blue light of dawn we woke to another day of riding. At the end of our ride we arrived to the first substantial Laotian city of our route: Luang Prabang. It is one of the main reasons I opted to take on this tour; Luang Prabang is home to the UNESCO World Heritage Site that was once the capital of an ancient kingdom of the same name. The cultural melee in the city is irresistible; monks abound, many begging alms after the daily 6am mass food donation, and others quietly underway to their places of worship (often caves filled with Buddha statues); there are innumerable temples, and the presence of new commercialism offers an observable slice of modernity alongside authentic Laotian culture. When another morning comes and we awake in the hotel, some of us head out to walk along the banks of the tumultuous Mekong River.

Later, we sit and admire the swooping design of the Wat Xieng Thong Temple. Closer to the center, I squint up at the facades of colonial buildings—remnants of the Francophone influence that once ruled here. Later, we gather the group and motor out to the Kuang Si Waterfalls, a site of pure bliss for weary travelers. I think I lost myself for a moment there. It was a bittersweet morning when on the 12th day of our journey we headed out from Luang Prabang. But the road did not allow monotony; instead, towering limestone rock seemed to grow higher with each passing mile, and awe defined the track all the way to Vang Vieng. Now we had arrived to a true backpacker town. Viang Vieng has capitalized on the backpacker boom, and so here we would find a multicultural makeup in the bars and restaurants lining the river. Some of our group jumped into the river to go tubing and drink beer. I sat and watched the sun disappear, happy enough to reflect on our extraordinary two weeks.

I had prepared myself for the end, and when the next day we arrived to the capital of the country in Vientiane, my mind was ready to let it go. But it had been a spectacular ending. We came over the mountains, through what looks like utterly obscure territories on the map. We had seen the rice terraces and ancient cultural edifices, and today we had gone through a veritable psychological straightening, in direct correlation with the straightening of the road and flattening of the land, to bring us back to bustling civilization in Vientiane. We spent one last night in a hotel together, and in the morning we shared one last breakfast. For some of the others in the group, this was the beginning of new adventures in Southeast Asia. One guy headed off to Angkor Wat in Cambodia; another took a flight to Beijing. I was going back to Canada. I had seen enough beauty to keep me inspired for many months to come.