Skip to content
Previous Next
MOTORRAD action team in Yunnan

After two days without wheels in Beijing visiting the spectacular Great Wall and the Forbidden City, the motorcycle action team is hot to get driving. When we finally arrived in Dali in the heart of Yunnan, Hendrik’s house supplied a nourishing “action team breakfast”. The Shineray X5 400 motorbikes, neatly lined up, surround the breakfast table; they have already been fed and are ready to go. For the riders, there are scrambled eggs with Tibetan butter, homemade bread and good coffee (which is hard to get in China). The support vehicle is quickly loaded. It is a Great Wall pickup, made in China, but “European style” with a modern turbodiesel motor. A replacement off-roader and all the baggage are stored in the Tetris system on the pickup bed.

The Motorrad action team is the travel team of the biggest motorcycle magazine in Europe, Motorrad. The action team offers exclusive training programs, motorcycle events and travel packages in Europe and further afield.

Most of the riders take the narrow dirt path from the house to the road with style, but some wish to first get accustomed to riding and let someone else drive their bike to the road. And then, suddenly, we are in the middle of the road traffic of the Middle Kingdom! Chinese traffic is something else. While there are, in principle, traffic laws in China, these are regularly ignored. Everyone just starts driving, first entering the traffic and only then taking a look at the situation. In this chaos, in which every man thinks only of himself, only communication with the horn makes it possible to survive this process of survival of the fittest.

However, it is only necessary for us to remain on the main road a short while until our journey takes us onto the lonely mountain roads leading to Shaxi, an old trade center on the tea road. Some of the group rush ahead, others take it in a more relaxed fashion. Some time must pass before the action team develops a workable group dynamic. From Dali to Shaxi, each rider is free to choose his own pace: because there is no possibility of getting lost, the group has no need to ride in convoy. Rather, everyone can ride to the agreed upon destination in the manner of his own choosing.

The road is great for a travel off-roader like the Shineray. The road is winding, an asphalt road with an occasional spice of gravel. The landscape changes quickly. Near Eryuan, we are still traveling through swamps and jungle stretches. After that, the road goes up through a Mediterranean pine forest and down again to dry savannah mountains in whose valleys water buffaloes graze on the banks of the naturally meandering riverbeds. The scenery alternates between small villages and rice terraces until we reach the idyllic old city of Shaxi.

Hendrik says “Here is Shaxi, follow me!” … And he drives directly to the wrong hotel. We are already parking the motorcycles in the courtyard when we hear the words, “This is a nice hotel, but it is not ours!”. A short period of confusion follows. Daniel and Achim also get lost in the wrong hotel, but in the end, everyone gets their rooms and has earned a cold beer on the Theatre Square of Shaxi.

The day ends with 216 ritual prayer bows by our Tibetan tour guide Sonam. 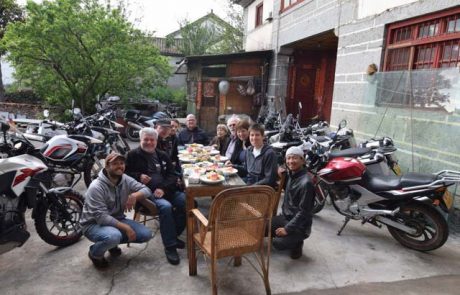 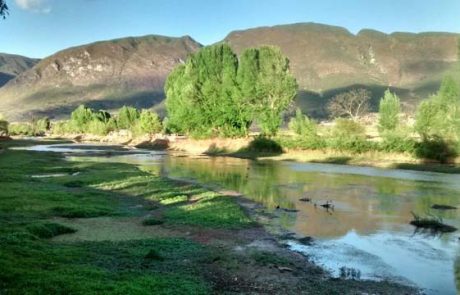 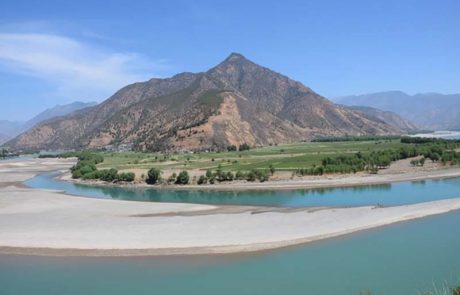 After a hearty breakfast of stuffed dumplings (momo) and instant coffee, we get back on the road again quickly. Before we can drive into the legendary Tiger Leaping Gorge, it starts to drizzle, and it suddenly seems as though we are driving into a specially designed motorcycle hell: kilometre-high rock walls, shining with moisture, winding concrete roads with bad traction and no guardrails. In the event, we go neither to hell nor heaven; still in this life, we make it to our inn in the gorge. Later, on our walk, we have better luck, and it clears up. The depths of the canyon reveal themselves and surpass the measure of the human eye. 3600 meters above us, the rock massif of the deepest gorge in the world shimmers in the sunshine and still higher above it throne the peaks of the Jade Dragon snow mountains. Following a path built from a Chinese repair kit of wooden structures, metal ladders, overhangs and tunnels, we climb down to the massive power of the Yangtze River, whose bizarre water masses distort the vision if one looks too long.

You have never experienced the power of nature in the way it comes to expression here. 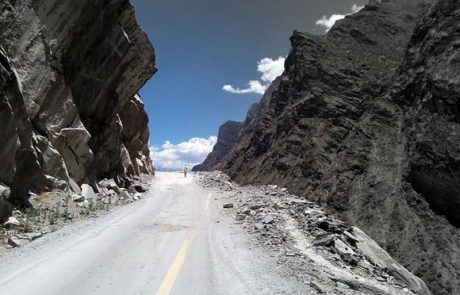 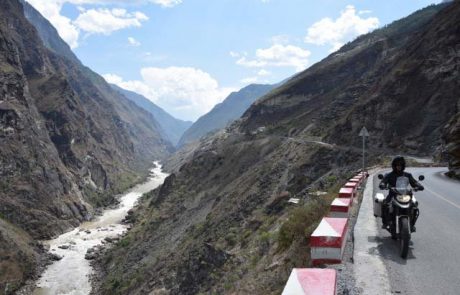 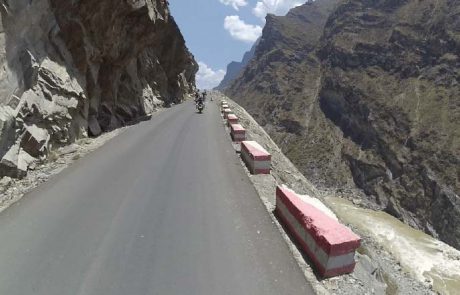 We eat a simple, quick lunch in a small, poor village of the Chinese Naxi minority, and then we go higher and higher, first conquering a 3500 metre pass with our bikes, then one of 3700 metres… and suddenly we are in Tibet! Large pompous houses like fortresses of mud line the street, full of rich wooden ornamentation; many herds of yaks grazing in the high meadows on the “Roof of the World”. And great wooden shafts, used for drying hay, stick up into the heavens like gigantic chairs without seats. Shortly before Shangri-La it gets cold and rainy, but a fire awaits us at the Kersang Relay Station, where you can warm up, dry your motorbike gear and drink Tibetan butter tea.

Soot on the house wall is a hint pointing to the fire of two years before. The fire wiped out the Old Town of Shangri-La but spared the guesthouse. Meanwhile, the city has been rebuilt beautifully, true to the old style.

The name Shangri-La goes back to James Hilton, who described a utopian paradise in his novel from 1933. It was located in the Himalayas, where the residents lived a life in denial of civilisation’s haste, did not get sick and attained life spans as long as those in the Bible. In the temple in the Old Town, we turn the biggest prayer wheel in the world and think: reaching a biblical age is not bad, but the special experience of motorbike riding on this trip is incomparably better.

Over the White Horse Pass

In the morning there is an announcement from our tour guide Hendrik: “Unfortunately, the weather has changed. Ahead of us is a 4300-metre pass. It can get really cold there, and there can be snowfall. The most dangerous part may be the descent! If it doesn’t rain, we can do it. We have contacted people who live there, both before the pass and at our destination, and there is currently no precipitation. We must now wait until it is about six degrees, and then we’ll try it! “

Said and done. We buy fur hand- and footwarmers for everyone and start driving the switchbacks. The action team group are all experienced riders who fully enjoy every curve, and glide over the mountain roads with ease. The landscape is soon covered in snow and patches of fog drift between the trees with their lichen beards. The road remains dry. There is only us and the landscape that we conquer. Tourist attractions lose their significance when compared to the intensity of concentration necessary for driving here. As the saying goes: When you follow the line on the road, your spirit becomes a line, the taut string of a bow for whom there is only one target, a target that always must be hit. All doubts and all of your spiritual ballast disappear in the centrifugal force of the million switchbacks of the Yunnan mountain world.

Suddenly the clouds break up and in the gleaming light, the highest peaks of Yunnan welcome us. We are allowed to pass. 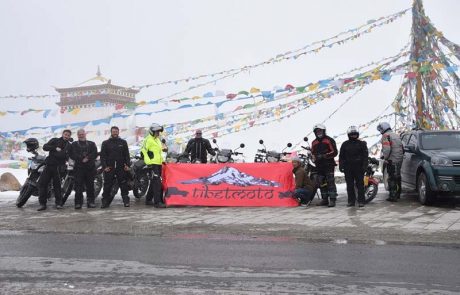 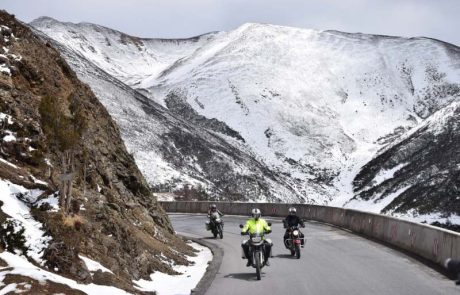 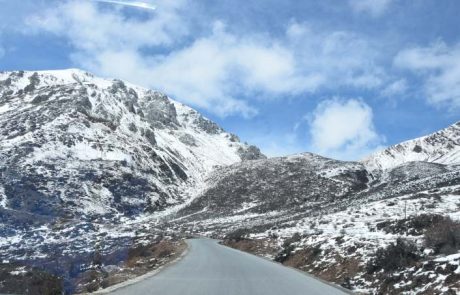 After the pass, the clouds close in again. This is unusually bad weather for April, and we attribute it to global warming since the Buddhist gods can hardly have anything against us: we honor them with our speed and the roar of our engines.

We do not stop in the next town. According to the local gossip, it is a dangerous place where wild Tibetans kill each other with their decorative knives because of disagreements. We continue along the banks of the Mekong. Jiabe, in stark contrast to these violent stories, is a small idyllic village in which just a few families live in harmony with nature.

The Mekong flows here through the ravines of Mordor, a moonscape in which Jiabe is an oasis with its meadows and walnut trees. Hendrik’s relatives have a homestead here in their beautiful Tibetan house with its decorative wood carvings. In the courtyard lower down, dogs, cows and goats live together. We partake of the world’s best honey and a Tibetan supper… and we drink Ara, their homebrewed liquor.

The next day we follow the waters of the Mekong down the river and drive along the border of Myanmar.

And then there is an accident! I realise, at first a little late, that Daniel is asking us to turn on the pickup’s warning lights. Suddenly, I see another tour member who has stopped with his motorcycle on the left hand side of the road. Only then do I realize that something has happened. A totally crushed saddlebag is pressed into my hands. I quickly ask him if he has been hurt. No, he was not injured. Reconstruction: directly after a village turn-off in a curve, he passed a small van that simultaneously passed a car and hit the motorcycle on the right-hand side. The saddlebags of a motorbike are an important deformation zone in a collision scenario.

We meet the Yangtze again, and, after the scare, we drive fearlessly onward along the narrow roads leading to Lijiang. It is an honour for me to drive with the Motorrad action team. After a long day of driving, they still have enough strength left for some playful acrobatics on the motorbike: The dying swan, Superman, the tobaggonist; like a pack of crazy wolves we invade Lijiang. 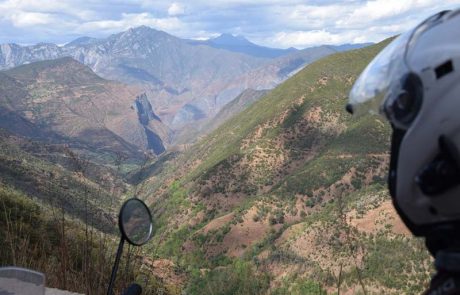 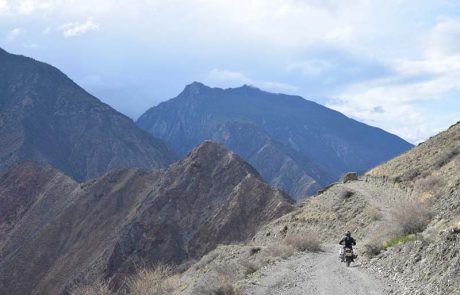 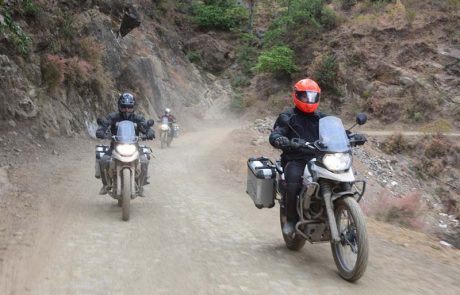 To Lugu Lake and the Mosu

It turned out not to be our day. We wanted to have a look at a fantastic village built of stone, but the road is being repaired and is blocked. Then we get lost and accidentally visit a gigantic dam project, but these hardships are quickly forgotten as we cross a bridge over the Yangtze and are overwhelmed by the turquoise-blue colour of the water, the strange shapes of the mountains, and the exciting roads. At the end of this perfect leg of the journey, the alpine Lugu Lake is awaiting us. There the Mosu minority lives, the last existing matriarchal culture of China.

The following day, the road continues downward until we get back into a tropical climate. We can enjoy the sun and heat in the Chinese countryside one last time away from the urban bustle, between palm trees and banana groves. Back in Dali we get a great dinner in an exquisite restaurant and talk about the intense experiences of the journey over some beers and schnapps. In our minds, the journey goes on, we explore every curve in our memories, we drive each leg of the journey over and over again, dash along every gravel road of our souls, renewed again with the roar of our engines reverberating inside us. 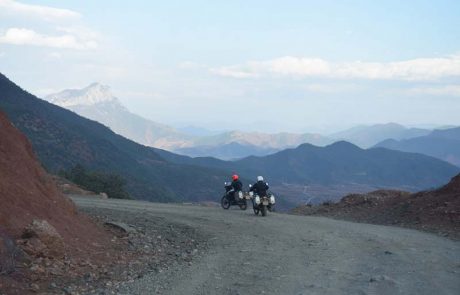 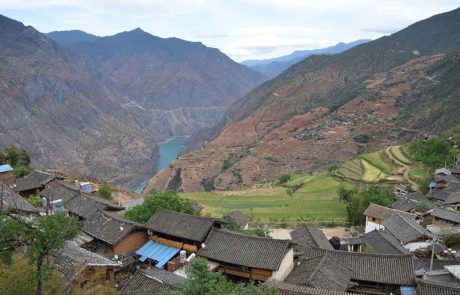 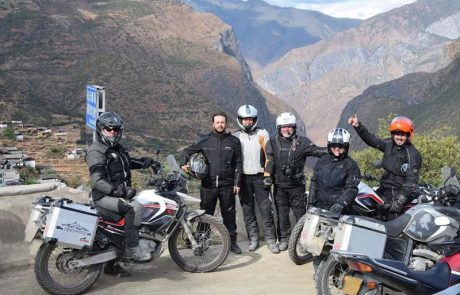